The Most Fatal Intersections in America [Study 2019]

No stretch of road is entirely free from danger. From one-way streets to six-lane highways, drivers have cause for caution. Intersections are especially prone to accidents, with traffic flowing in multiple directions and frequent confusion about the right of way.

While local laws differ substantially, most drivers are familiar with the challenges inherent to intersections: braving a left turn across oncoming traffic, waiting for pedestrians to make it across the street, going right on red etc.

But how often do these intersection hazards result in disaster and lead to fatal crashes?

To find out, we turned to data from the Fatality Analysis Reporting System (FARS), a national record of deadly accidents maintained by the National Highway Traffic Safety Administration.

Analyzing information from 2010 through 2017, we determined which intersections witnessed the greatest loss of life across the country. At the state, county, and city levels, we identified places where intersections produce a stunning number of accident fatalities. To understand the perils of intersections in your area, you don’t want to miss what we uncovered. 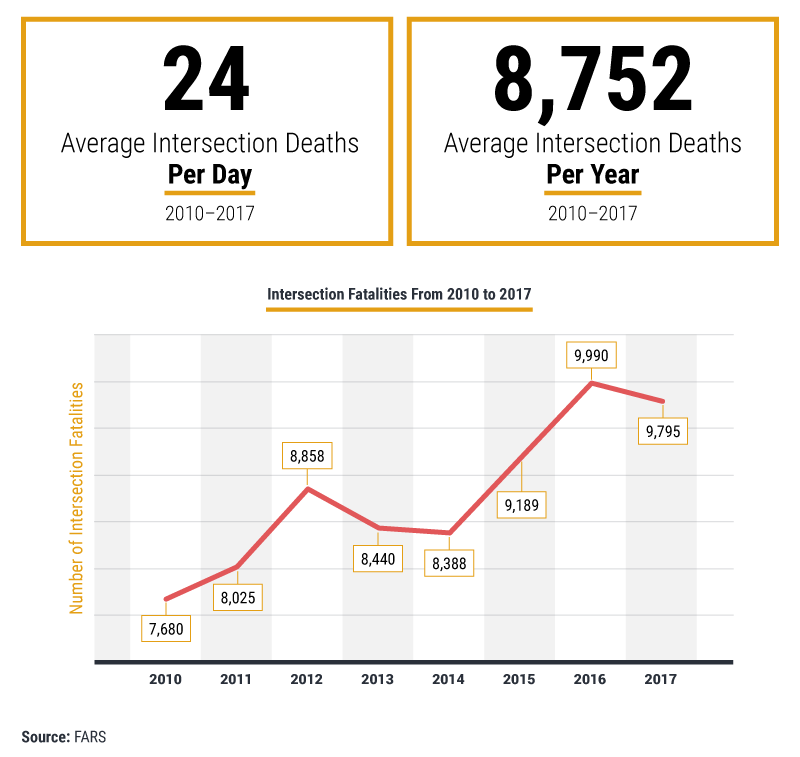 Between 2010 and 2017, an average of 24 people died each day in traffic accidents at intersections across the country. In some ways, this figure represents a public safety crisis.

Crashes at intersections claim more lives each day than other widely publicized threats, such as the national shortage of organ donors. Of course, some states contributed more to the national average than others.

These figures certainly reflect the populations of these states. More residents translate to more cars and pedestrians, and thus more accident potential. Similarly, many of the states lowest on this list are sparsely populated. Local challenges definitely contribute to intersection accidents in many cases as well.

In Florida, a roadway system built to accommodate vehicles often fails to protect those on foot, making the state particularly deadly for pedestrians. In California, congestion in and around major cities in so intense that accidents inevitably ensue.

Below, we’ll examine intersection deaths in cities, counties, and particular locations, examining the causes of crashes in each place.

In many states, a single intersection produced a devastating number of deaths during the period studied. Additionally, these fatality totals often reflected a single horrific incident.

In 2015, a car crashed into a van carrying 18 passengers at a highway intersection in Moore Haven, Florida. Eight people died, stirring debate about whether additional lighting might have prevented the crash.

In a 2013 incident in Upper Arlington, Ohio, a police officer responding to a robbery smashed into a car carrying a family of six. All members of the family perished in the accident. Another 2013 crash in Spencer, North Carolina, involved just one vehicle: A drunk driver and five of her passengers died after she careened through an intersection and into a tree.

Texas was home to two of the nation’s deadliest intersections, including one at which a suspect killed six individuals while attempting to evade law enforcement in 2014.

Yet, even less populous states had highly deadly intersections of their own. Montana, for example, saw five teenagers pass away in a 2010 crash on notorious “Thrill Hill” road. The next year, authorities enacted changes to eliminate a hairpin curve and improve visibility at that intersection.

Perilous intersections in towns such as Sherburn, Minnesota, and Lyndon, Kansas, prove the same point: Deadly crossings exist outside of big cities. 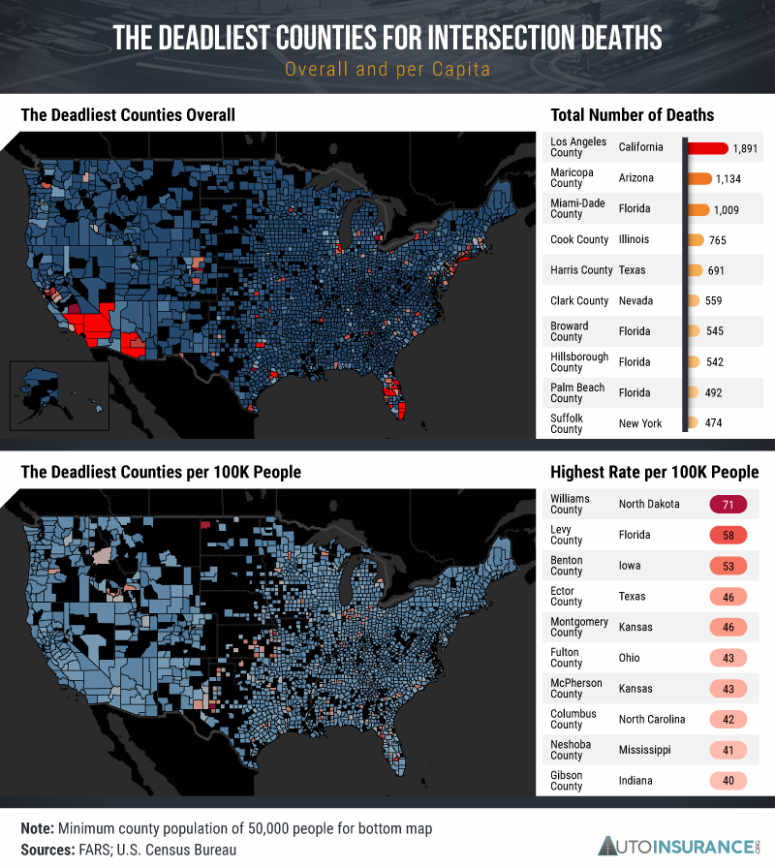 Yet, Florida may have the most widespread challenges, with four of the top 10 counties for total intersection deaths. According to experts, staffing shortages have limited law enforcement efforts to police Florida’s roads. In Palm Beach, Broward, and Miami-Dade counties, the number of traffic citations has declined, while crashes have increased.

When we studied intersection fatalities per capita, however, some sparsely populated counties emerged as particularly dangerous. At the top of the list Williamson County, Texas, which is just north of Austin and includes small parts of the Texas capital.

Williamson had an unusually high number of fatal accidents taking place at intersections. We excluded many counties due to their small populations, such as Loving County, Texas.

With just 134 residents, Loving County serves as a key conduit for the oil industry – and the mass of trucks and tankers passing through have pushed its accident fatality totals to absurd extremes.

During the period studied, various states displayed vastly different trajectories for intersection deaths relative to registered vehicles. In a few cases, such as Arkansas, vast improvement occurred between 2010 and 2017.

But for every positive case, another state presented a troubling counternarrative. In Colorado, for example, intersection deaths have been on the rise since 2012.

Some might blame this development on lax enforcement. In Denver, for example, traffic citations have significantly declined. Others might attribute the rise to the legalization of marijuana, although other cannabis-friendly states like California and Oregon haven’t seen a similar increase in intersection fatalities.

Interestingly, the places at the very top and bottom of this ranking stayed largely steady in their respective positions. Florida held the unenviable first position for the vast majority of the period studied, while sparsely populated states like North and South Dakota ranked near the bottom of the list.

Although these states have relatively high per-capita fatality rates, they rank 23rd and 24th in total miles of roadways, respectively, leading to their relatively low intersection death rates when measured by the total size of the roadway system. While we typically associate intersections with local streets rather than large freeways, fatal crashes do occur along key highway junctures. Entering and exiting freeways can get particularly hairy, and civil engineers have long sought ways to make these “interchanges” more safe and convenient.

Our findings suggest highway intersection deaths are common along much of America’s East Coast but are most prevalent in Florida by far. Indeed, even for federal highways passing through multiple states, Florida seemed to be the epicenter of intersection deaths.

A prime example is U.S. Highway 1: While the highway extends up to Maine, the intersection deaths are concentrated in Florida. This reality reflects the nature of the road near Florida’s southern point: As drivers get closer to the Florida Keys, the highway begins to seem more like a local road, complete with stoplights, varied speed limits, and traffic.

Similarly, second-ranked U.S. Highway 41 passes through several Florida communities, with some intersections along the highway getting major upgrades as of late.

Not all federal highways pass through Florida, however. On east-west thoroughfares, such as U.S. Highway 50, U.S. Highway 60, and U.S. Highway 30, Indiana, New Jersey, Kentucky, and Kansas had particularly dangerous stretches.

Powerful Protection: At Intersections and Elsewhere

Our findings confirm that intersections present definite dangers, resonating with the anxieties of drivers across the country. Still, our data also defies some common conceptions, proving that intersections can be deadly in remote areas as well as congested cities.

Moreover, traffic deaths can rise or plunge precipitously in the space of a year, suggesting that precedent does not guarantee future safety. However, significant improvement can be made swiftly if cities, states, and counties take meaningful steps to address the danger in their midst.

Individual drivers, of course, may feel powerless to change the infrastructure of their local intersections, but you can always take charge of your driving safety, demonstrating appropriate caution at every crossing and remaining wary of other drivers.

Additionally, you can invest in the right protection on the road, shielding yourself from costly repairs, medical debt, and legal liability. That peace of mind demands the right policy, and we’re here to help you find the perfect coverage.

At AutoInsurance.org, we can help you find the protection you need and substantial savings on your premiums.  We’ve got you covered with a customized quote.

This project made use of the data from the Fatality Analysis Reporting System (FARS) provided by the National Highway Traffic Safety Administration, specifically for 2010 to 2017 (the most recent data available).

FARS data on the types of intersections are sparse, so this project assumes that any record identifying a cross street (TWAY_ID2 in the FARS codebook) in addition to a primary roadway (TWAY_ID) would have taken place at or near an intersection.

Additional information on county-level population data was taken from the U.S. Census Bureau, and data on the number of vehicles registered per state were from the Federal Highway Administration.

While this project presents exact numbers, it is likely they differ slightly from true figures in some cases. This could be due to the need to discard a percentage of records due to failed geocoding, incomplete records or missing data in FARS, or a nonuniform standard for counties and local municipalities in reporting accident data to the NHTSA.

We hope you’ll consider sharing this content with your friends and followers. By raising awareness of intersection dangers, you could help someone avoid an accident. If you do want to use our work on your website or social media, we have two simple requests. First, please use our information and images only for noncommercial purposes. Second, please link back to this page so that others can explore all our data.

Looking for something specific? Use the search bar below to find answers to your questions!