Skip to content
Home › Features › The 5 Deadliest Defects in History

The 5 Deadliest Defects in History

We all know there are serious risks involved in operating a motor vehicle, but many people don’t realize there’s a statistically high chance for hidden defects by vehicle manufacturers, like ticking time bombs, to be lurking in their perfectly tuned, “Top Safety” rated, dependable vehicles.

Deadly manufacturer defects are much more common than most people think, and automobile manufacturers aim to keep it that way. These faulty pieces and dangerous designs are successfully killing hundreds of people each year.

Too Little, Too Late

Some of the following deaths caused by defects were highly publicized, but most of them were purposefully kept quiet. In many cases, several years went by before those who lost loved ones discovered it was a defect that caused the accident.

There were even drivers charged with homicide and sent to prison that weren’t freed until the manufacturer was legally required to announce the true culprit.

Hundreds of people suffered years of unimaginable pain and guilt before they received a letter in the mail notifying them of the deadly defect they needed to get fixed in their vehicle . . . not just many years, but many lives too late.

Unfortunately, defects and safety recalls can be out of your control, but your car insurance isn’t. Use our free tool to find the best coverage.

The 5 Deadliest Defects in History 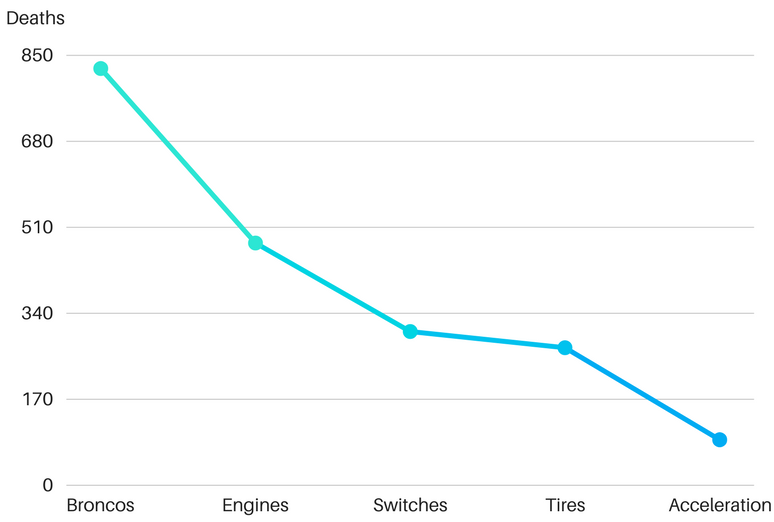 This countdown of defects comes from hundreds of reports, years of research, and is backed by both heartache and controversy.

Beginning in 2000, NHTSA got 6,200 notifications about Toyotas spontaneously accelerating leaving the drivers unable to stop or even slow down.

Finally, after about a decade of complaints, accidents, and deaths, Toyota recalled 5.2 million of their vehicles blaming the floor mats and then a year later another 2.3 million, this time claiming “sticky” floor pedals were the cause.

When those two recalls didn’t stop the unintended acceleration, Toyota was forced to recall another 1.8 million vehicles. After an astronomical total of 9.3 million vehicles were recalled, this deadly defect was finally under control.

Unfortunately, no amount of recalls could bring back the 89 lives claimed in those tumultuous Toyotas with minds of their own.

There are many who believe those vehicles had faulty electronic throttle control systems, but Toyota stands by its claims that ill-fitted floor mats, sticky gas pedals, and user error were the only causes for the thousands of resulting accidents. Regardless of the reason, it was proven Toyota should have acted sooner.

The Japanese company was charged with the max penalty, $16.4 million, for misleading consumers and continuing to manufacture vehicles knowing there was a deadly problem.

Fortunately, this defect’s death count remained under 100 and the serious injuries didn’t surpass 60, because it could have been much worse.

Both Firestone and Ford have blamed each other and hid details from the public about what went wrong and when. What’s indisputable is that an alarming 271 deaths and over 700 injuries were caused by Firestone tires experiencing detrimental tread separation and sudden, deadly blowouts.

Beginning in the early 1990s, NHTSA received over 3,500 reports about these defective tires, so they began investigations to get to the bottom of the problem.

Three months after NHTSA started digging around and nine months after Ford started recalling tires on their vehicles overseas, in 2000, Firestone finally recalled 14.4 million of their faulty tires in the U.S.

There are reports that engineers at the Decatur, Illinois, plant, where the defective tires were made, knew there was a safety issue long before the tires were bolted onto vehicles.

There are also claims that Ford employees brought balance issues with the Ford Explorers to administrators’ attention long before they were put on the market.

A flip-happy Explorer rolling many miles per hour on top of flimsy tires makes for one deadly drive.

Thanks to Ford and Firestone, Bill Clinton signed a law making recall requirements stricter, and the Decatur Firestone plant closed in December of 2001.

There can’t be many experiences in life scarier than cruising upwards of 60 miles per hour when your car suddenly shuts off leaving you with brake failure and without power steering or air bags to cushion you when you finally stop by crashing into something.

Unfortunately from 2003 to 2011 General Motors installed defective ignition switches in millions of their vehicles causing that exact horrific event to occur.

303 people died and many more suffered life-changing injuries, making GM’s ignition switches the third most deadly defect to date. In total, 2.6 million GM vehicles were recalled and five million notices were sent out to registered owners due to this manufacturer defect.

There are reports that auto-shut off cases were reported beginning in 2001, five whole years before anything was done to correct it. GM fired 15 of their employees and got fined $35 million for not notifying NHTSA sooner of the defect.

Unfortunately, this deadly defect is probably not done claiming lives. As of May 2015, only 75 percent of the vehicles with the faulty ignition switches had been fixed.

Back in 2005, Fiat initiated a secret major redesign because their Jeep Liberty and Grand Cherokees had over double the death rate of any SUV in its class with the exploding gas tank problem on real life and test crashes.

Fiat knew the gas tanks weren’t properly protected, but they kept this error in manufacturing quiet for well over a decade to save money on recalls and repairs.

Even after a child’s highly-publicized, heartbreaking death in their Jeep Grand Cherokee, Fiat still wouldn’t admit their error. Since 1998 there have been 478 deaths resulting from what could have been injury-free, fender benders.

Finally, 15 years after those fiery crashes began and one year after that 4-year-old, Remington, burned to death on his way to tennis in June of 2013, the NHTSA required Fiat to recall 2.7 million of their vehicles.

However, even then Fiat only recalled 55 percent of the vehicles deemed unsafe, and somehow got approval to install hitches to “fix” the remaining 1.2 million.

A full two years after the recalls, only 4 percent of the faulty Grand Cherokees and 27 percent of the Libertys were repaired, which is one of the slowest rates of recall repairs by a car company in history.

Plus, over a million defective vehicles were only suited with a hitch that shortly proved to only make matters worse — lancing its way through the entire vehicle in high-speed crashes.

Killing more people than any other manufacturing defect since the invention of automobiles themselves is Ford’s deadly design of the Bronco II.

Back when this SUV was just a prototype, Ford discovered it would tip onto two wheels going as slow as just 20 mph, but the defect was ignored since the repair cost was expensive and would delay the release date.

You would think the manufacturing error that claimed the most lives, had an “Avoid” rating from Consumer Reports, and a “Most Deadly” rating from IIHS, would result in the most recalls for consumer protection, but with exactly zero, that certainly wasn’t the case.

Ford did absolutely nothing to fix the faulty design or warn drivers about how deadly their Bronco II truly was. You might even still see a “Bucking Bronco” bobbing down the road on your next drive to the grocery store.

Thankfully, Ford stopped making their serial-killing vehicle in 1990 when it was replaced with the Explorer, which ironically has many of its own detrimental issues.

It would be interesting to know how much money the Ford administrators concluded they’d lose if they redesigned the Bronco prototype back in the early 1980s because the company has paid over $2.4 billion in settlements due to the hundreds of deaths and thousands of injuries it caused.

These five manufacturer defects alone have killed a devastating total of 1,964 Americans. History is proving that far too often money trumps safety for car manufacturers.

Diligently research the make and model of the vehicle you’re interested in, read up on crash tests, safety ratings, past and current recalls . . . do all this, and hopefully you’ll avoid buying a vehicle with a deadly, hidden defect.

We have to take extra measures to ensure the safety of ourselves and our loved ones—now more than ever.

Keep in mind that some auto brands can be more dangerous as well. In our study calculating which auto makes get in the most fatal crashes, Ford came out first with a little over 21,000 fatal crashes in our study period. Some auto manufacturers prioritize safety more than others.

Part of those “extra measures” you need to do to protect yourself financially is to choose the best auto insurance for your family. Enter your zip code to compare and shop here.

The 36 Best Teen Audiobooks for Road Trips
Delivery Driver Auto Insurance (Rates & Requirements in 2023)
Can I transfer my auto insurance to another person?
The State of Federal Highways and Bridges [2019 Study]