Interactive graph with all state rankings based on safest highways: 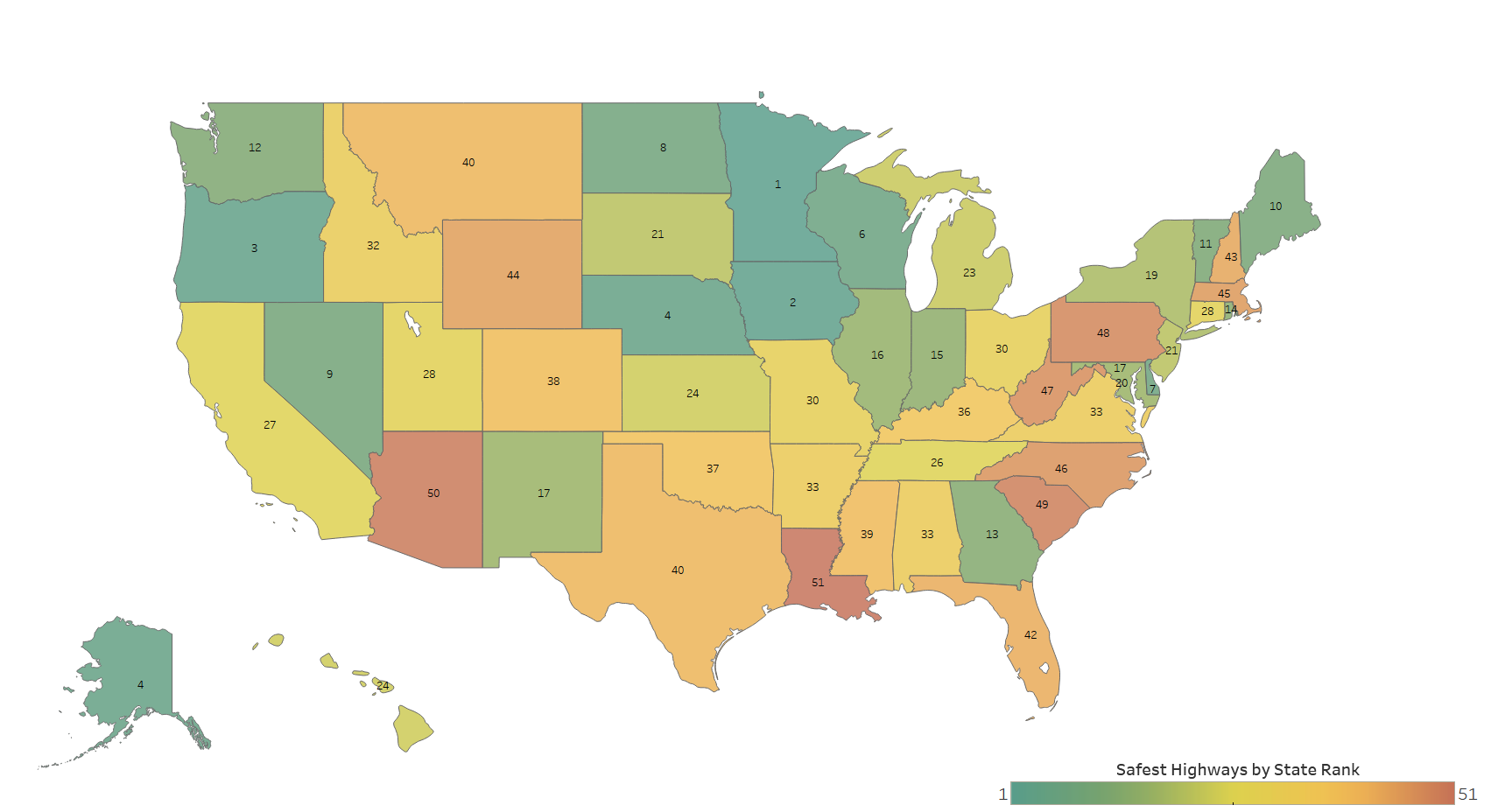 In the midst of the end of the year holidays, itâ€™s fun to get swept up in the lights, the gifts, and the excitement of seeing loved ones to celebrate such a special season.

For many, what makes Christmas and New Year’s a magical time of year is spending it with friends and family. People often resolve to take to the roads and drive long distances to see family. In this article, we highlight one of those challenges by looking at the safest highways by state.

During Christmas and New Yearâ€™s, itâ€™s over 50 percent more likely that families and individuals will go on a road trip lasting longer than 50 miles according to Forbes.

The possibility of facing a long road tripÂ means that many people on the roads during this holiday season are traveling through multiple states as quickly as they can.

Because of this, it is important to know more about the states we travel through in order to better understand how safe the roadways are and how likely it is to have a car accident.

More: Is Left Lane Driving Allowed in Your State? [2022 Update]

Read through this article to see if any of the states you plan to drive in this holiday season make our list of the safest highways by state. Then, enter your ZIP code into our FREE tool above to find auto insurance rates that work for you.

You can also check out our page titled “Which states have the cheapest auto insurance rates?” to find out what the average rates are in your state and whether you’re overpaying or underpaying based on the coverages you have and your situation.

This article will also cover the following topics:

Now, let’s get to those 10 states with the safest highways. Some of the states and the categories they do the best in may surprise you.

Top 10 States for the Safest Highways

We’ll start with the 10th best state for safest highways on this list: Maine.

Coming in at #10 on our list, Maine boasts the safest highways with regard to Interstate Speeding Fatalities per Mile of Interstate.

Drivers in Maine obey the posted speed limits on interstates and highways, and this has helped many stay safe on the roads.

More: The Most Fatal Intersections in America [New Study]

While a score of 10 for the Percent of Drivers without Seatbelts is nothing to brush over, drivers in Nevada need to stay alert while traveling long distances in order to avoid having tragic accidents.

North Dakota boasts a top score with regard to Highway Bridges Rated Obsolete or Deficient.

But they also sit in 48th place for Death Rates as determined by the Insurance Institute for Highway Safety.

Needless to say, North Dakota has a long way to go before it can be considered the state with the safest highways in America.

Coming in at #7, Delaware seems to be its own special paradox.

Boasting a simultaneous first-place in Highway Deaths per 1,000 Highway Miles Traveled and last-place in Interstate Speeding Fatalities per Mile of Interstate, it seems as though driving in Delaware can be both safe and treacherous depending on which statistics matter to you the most.

With an above-average score for IIHS Death Rates (28), the state certainly still has some work to do to become a safer place to drive.

Our #6 spot goes to the Dairy State.

Wisconsin scored below-average in IIHS Death Rates (22) and Interstate Speeding Fatalities per Mile of Interstate (16), and that is certainly something to celebrate.

Nebraska ties with Alaska for the #4 spot on our Best Highways by State list.

While Nebraska maintains reasonably safe highways, because nearly 20 percent of drivers in Nebraska choose to drive without wearing their seatbelts, the state sees many unnecessary fatal accidents each year.

With a top score for Federal Funding, Alaska ties with Nebraska for #4.

With below-average scores for Interstate Speeding Fatalities per Mile of Interstate (2), Percent of Drivers without Seatbelts (21), Highway Bridges Rated Obsolete or Deficient (22), and IIHS Death Rates (16), Alaska seems to be a relatively safe place to drive.

But with the worst possible score for Highway Deaths per 1,000 Highway Miles Traveled, Alaskan drivers prove that they still have a lot to work on.

Coming in at #3, drivers in Oregon are happy to obey the law and wear their seatbelts.

Scoring consistently under 20 for Interstate Speeding Fatalities per Mile of Interstate (14), Highway Deaths per 1,000 Highway Miles Traveled (7), and IIHS Death Rates (15), Oregon seems like a very safe place to drive.

The #2 spot on our Best Highways by State goes to the Corn State. Drivers in Iowa should be proud of themselves.

They stayed below-average in every category except IIHS Death Rates, and while this category and its implications are important, Iowa drivers certainly drive with safety and precaution in mind.

Iowa scores another big win in our study about the best drivers in the U.S. by state. It is ranked seventh overall, with a subcategory ranking of second overall for careless driving.

Minnesota tops our list at #1 for the Best Highways by State.

Scoring under 15 for Interstate Speeding Fatalities per Mile of Interstate (9), Percent of Drivers without Seatbelts (13), Highway Deaths per 1,000 Highway Miles Traveled (4), and IIHS Death Rates (7), itâ€™s evident that Minnesota boasts the safest highways in the U.S.

One way we can work to protect our roadways is to drive defensively. Because human error is responsible for 94 percent of all car crashes, we need to take our role as motorists seriously (NHTSA).

Defensive driving helps us drive with purpose, avoid distracted driving, and commit to obeying common driving laws, specifically with reference to drinking or texting and driving.

Start driving defensively today by focusing on the following tips:

Now that we’ve covered the states with the safest highways in America, let’s get to your frequently asked questions, which cover everything from the most dangerous interstate in America to which state has the most aggressive drivers.

#1 â€“ What is the most dangerous interstate in America?

#2 â€“ What is the safest driving state?

In our study of the safest highways per state, Minnesota is ranked No. 1, scoring second-best in the number of obsolete or deficient bridges.

Minnesota also ranked first in our most recent best drivers ranking, with scores in the top six of all states for the subcategories, including being the safest state for careless driving with the lowest rate of pedestrian and bicyclist deaths. These great stats can make it easier for drivers to find cheap auto insurance for their vehicles.

#3 â€“ What is the most traveled interstate in America?

#4 â€“ What is the deadliest road in the world?

While the North Yungas Road in Bolivia (also termed the “Road of Death”) is considered to be the deadliest road in the world, all those considered on these types of lists have similar characteristics: high drop-offs, uneven and unpaved roads, weather conditions that obstruct visibility, and drivers that often try risk maneuvers.

Interstate 4 is considered so dangerous because it combines a number of difficult challenges that contribute to an intimidating driving environment. These include the high traffic volume, number of commercial vehicles, construction sites, and more.

#6 â€“ What state has the most aggressive drivers?

While it can be tough to gauge which states have the most aggressive drivers, there are certain states that turn up frequently on worst drivers lists. Those include South Carolina, New Mexico, Texas, Louisiana, and others. Drivers in these states have major problems often with speeding or drunk driving, and almost always with the number of traffic deaths per 100 million miles driven.

Methodology: Determining the States with the Safest Highways

To compile information for this study, we used data collected in the following categories:

The information we collected came from the following sources:

Here are the complete rankings for every state and D.C. in regards to our study about the safest highways by state. It is ranked in alphabetical order with the state’s overall ranking on the far right column.

Read more about our safest highways by state map’sÂ full stats and sources for each category. For all media inquiries, please email: [email protected]

Of course, how dangerous the highways are in a state does more than put your life at risk. It can have a serious impact on your auto insurance rates as states with more traffic deaths, or people that are filing claims due to accidents, often have higher average auto insurance rates.

To find out the best auto insurance for you based on your location and demographic information, just insert your ZIP code into our online quote comparison tool below.